DIONYSIUS SKYTOBRACHION ON THE LIBYAN AMAZONS

A translation of Dionysius Skytobrachion's account of the Libyan Amazons, the Atlantians and Gorgons as preserved for posterity in Diodorus Siculus' Library of History.

3.53.1We are told, namely, that there was once on the western parts of Libya, on the bounds of the inhabited world, a race which was ruled by women and followed a manner of life unlike that which prevails among us. For it was the custom among them that the women should practise the arts of war and be required to serve in the army for a fixed period, during which time they maintained their virginity; then, when the years of their service in the field had expired, they went in to the men for the procreation of children, but they kept in their hands the administration of the magistracies and of all the affairs of the state. 2The men, however, like our married women, spent their days about the house, carrying out the orders which were given them by their wives; and they took no part in military campaigns or in office or in the exercise of free citizenship in the affairs of the community by virtue of which they might become presumptuous and rise up against the women. 3When their children were born the babies were turned over to the men, who brought them up on milk and such cooked foods as were appropriate to the age of the infants; and if it happened that a girl was born, its breasts were seared that they might not develop at the time of maturity; for they thought that the breasts, as they stood out from the body, were no small hindrance in warfare; and in fact it is because they have been deprived of their breasts that they are called by the Greeks Amazons.

THE AMAZONS' HOMELAND: HESPERA IN TRITONIS

4As mythology relates, their home was on an island which, because it was in the west, was called Hespera, and it lay in the marsh Tritonis. This marsh was near the ocean which surrounds the earth and received its name from a certain river Triton which emptied into it; and this marsh was also near Ethiopia and that mountain by the shore of the ocean which is the highest of those in the vicinity and impinges upon the ocean and is called by the Greeks Atlas. 5The island mentioned above was of great size and full of fruit-bearing trees of every kind, from which the natives secured their food. It contained also a multitude of flocks and herds, namely, of goats and sheep, from which possessors received milk and meat for their sustenance; but grain the nation used not at all because the use of this fruit of the earth had not yet been discovered among them.

6The Amazons, then, the account continues, being a race superior in valour and eager for war, first of all subdued all the cities on the island except the one called Menê, which was considered to be sacred and was inhabited by Ethiopian Ichthyophagi, and was also subject to great eruptions of fire and possessed a multitude of the precious stones which the Greeks call anthrax, sardion, and smaragdos; and after this they subdued many of the neighbouring Libyans and nomad tribes, and founded within the marsh Tritonis a great city which they named Cherronesus after its shape.

54.1Setting out from the city of Cherronesus, the account continues, the Amazons embarked upon great ventures, a longing having come over them to invade many part of the inhabited world. The first people against whom they advanced, according to the tale, was the Atlantians, the most civilized men among the inhabitants of those regions, who dwelt in a prosperous country and possessed great cities; it was among them, we are told, that mythology places the birth of the gods, in the regions which lie along the shore of the ocean, in this respect agreeing with those among the Greeks who relate legends, and about this we shall speak in detail a little later.

2Now the queen of the Amazons, Myrina, collected, it is said, an army of thirty thousand foot-soldiers and three thousand cavalry, since they favoured to an unusual degree the use of cavalry in their wars. 3For protective devices they used the skins of large snakes, since Libya contains such animals of incredible size, and for offensive weapons, swords and lances; they also used bows and arrows, with which they struck not only when facing the enemy but also when in flight, by shooting backwards at their pursuers with good effect.

THE SUBJUGATION OF THE ATLANTIANS

4Upon entering the land of the Atlantians they defeated in a pitched battle the inhabitants of the city of Cernê, as it is called, and making their way inside the walls along with the fleeing enemy, they got the city into their hands; and desiring to strike terror into the neighbouring peoples they treated the captives savagely, put to the sword the men from the youth upward, led into slavery the children and women, and razed the city. 5But when the terrible fate of the inhabitants of Cernê became known among their fellow tribesmen, it is related that the Atlantians, struck with terror, surrendered their cities on terms of capitulation and announced that they would do whatever should be commanded them, and that the queen Myrina, bearing herself honourably towards the Atlantians, both established friendship with them and founded a city to bear her name in place of the city which had been razed; and in it she settled both the captives and any native who so desired. 6Whereupon the Atlantians presented her with magnificent presents and by public decree voted to her notable honours, and she in return accepted their courtesy and in addition promised that she would show kindness to their nation.

THE AMAZONS DEFEAT THE GORGONS

7And since the natives were often being warred upon by the Gorgons, as they were named, a folk which resided upon their borders, and in general had that people lying in wait to injure them, Myrina, they say, was asked by the Atlantians to invade the land of the aforementioned Gorgons. But when the Gorgons drew up their forces to resist them a mighty battle took place in which the Amazons, gaining the upper hand, slew great numbers of their opponents and took no fewer than three thousand prisoners; and since the rest had fled for refuge into a certain wooded region, Myrina undertook to set fire to the timber, being eager to destroy the race utterly, but when she found that she was unable to succeed in her attempt she retired to the borders of her country.

55.1Now as the Amazons, they go on to say, relaxed their watch during the night because of their success, the captive women, falling upon them and drawing the swords of those who thought they were conquerors, slew many of them; in the end, however, the multitude poured in about them from every side and the prisoners fighting bravely were butchered one and all. 2Myrina accorded a funeral to her fallen comrades on three pyres and raised up three great heaps of earth as tombs, which are called to this day "Amazon Mounds." 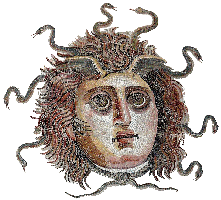 THE LATER HISTORY OF THE GORGONS: MEDUSA, PERSEUS AND HERACLES

3But the Gorgons, grown strong again in later days, were subdued a second time by Perseus, the son of Zeus, when Medusa was queen over them; and in the end both they and the race of the Amazons were entirely destroyed by Heracles, when he visited the regions to the west and set up his pillars in Libya, since he felt that it would ill accord with his resolve to be the benefactor of the whole race of mankind if he should suffer any nations to be under the rule of women. The story is also told that the marsh disappeared from sight in the course of an earthquake, when those parts of it which lay towards the ocean were torn asunder.

4As for Myrina, the account continues, she visited the larger part of Libya, and passing over into Egypt she struck a treaty of friendship with Horus, the son of Isis, who was king of Egypt at that time, and then, after making war to the end upon the Arabians and slaying many of them, she subdued Syria; but when the Cilicians came out with presents to meet her and agreed to obey her commands, she left those free who yielded to her of their free will and for this reason these are called to this day the "Free Cilicians." 5She also conquered in war the races in the region of the Taurus, peoples of outstanding courage, and descended through Greater Phrygia to the sea; and then she won over the land lying along the coast and fixed the bounds of her campaign at the Caïcus River. 6And selecting in the territory which she had won by arms sites well suited for the founding of cities, she built a considerable number of them and founded one which bore her own name, but the others she named after the women who held the most important commands, such as Cymê, Pitana, and Prienê.

7These, then, are the cities she settled along the sea, but others, and a larger number, she planted in the regions stretching towards the interior. She seized also some of the islands, and Lesbos in particular, on which she founded the city of Mitylenê, which was named after her sister who took part in the campaign. 8After that, while subduing some of the rest of the islands, she was caught in a storm, and after she had offered up prayers for her safety to the Mother of the Gods, she was carried to one of the uninhabited islands; this island, in obedience to a vision which she beheld in her dreams, she made sacred to this goddess, and set up altars there and offered magnificent sacrifices. She also gave it the name of Samothrace, which means, when translated into Greek, "sacred island," although some historians say that it was formerly called Samos and was then given the name of Samothrace by Thracians who at one time dwelt on it. 9However, after the Amazons had returned to the continent, the myth relates, the Mother of the Gods, well pleased with the island, settled in it certain other people, and also her own sons, who are known by the name of Corybantes - who their father was is handed down in their rites as a matter not to be divulged; and she established the mysteries which are now celebrated on the island and ordained by law that the sacred area should enjoy the right of sanctuary.

THE AMAZON THREAT ENDED BY MOPSUS AND SIPYLUS

10In these times, they go on to say, Mopsus the Thracian, who had been exiled by Lycurgus, the king of the Thracians, invaded the land of the Amazons with an army composed of fellow-exiles, and with Mopsus on the campaign was also Sipylus the Scythian, who had likewise been exiled from that part of Scythia which borders upon Thrace. 11There was a pitched battle, Sipylus and Mopsus gained the upper hand, and Myrina, the queen of the Amazons, and the larger part of the rest of her army were slain. In the course of the years, as the Thracians continued to be victorious in their battles, the surviving Amazons finally withdrew again into Libya. And such was the end, as the myth relates, of the campaign which the Amazons of Libya made.